Gold: USC's start begs a question -- just how good can the Trojans be?

LOS ANGELES — At some point in USC’s 41-28 win over Stanford on Saturday — probably around the time of its fourth straight scoring drive to open the game — it stopped being fun.

The Trojans were only up 21-7 at that point, but the way they’d gone up was so dominating, so utterly ruthless and unyielding, that everything we thought was possible went out the window. Suddenly, what was a novelty — Lincoln Riley coming to Los Angeles and bringing Caleb Williams with him, ushering in a hodgepodge of transfer talent that no one quite knew how to judge to a team that was fragile and wounded after the Clay Helton firing debacle — had become all too real.

In the span of eight drives, the Trojans went from “What could be?” to “ARE YOU SEEING THIS!”

And in the process, USC turned its season from a question mark to an exclamation point.

So here’s how it went:

Teams don’t do that to other conference teams, even ones that went 4-8 the year before.

In its 49-9 win over Mississippi State last year, Alabama punted on its second and third possessions. The Crimson Tide went into the second quarter up 14-3. A year before in a 41-0 win over the Bulldogs, Alabama went 14 yards on 6 plays in its second drive, ending in a punt. Also in 2020, in a 63-3 win over Kentucky, the Tide punted on their second drive.

They slowed down in the second half, a mixture of regression to the mean and Riley taking his foot off the gas pedal. But the damage had been done. To the Cardinal, yes.

But also to our collective psyches.

Looking back, warts and all — and there were and are still warts — USC being ranked 14th to start the season was a bit silly. It’s not so much that voters should have anticipated losses by Utah, Baylor, Texas A&M and Oregon within the first 2 weeks.

In fact, it has nothing to do with other teams at all.

How voters looked at an unprecedented influx of talent to an already 5- and 4-star-laden program and deduced that the Trojans somehow were not in the top 7 schools in the country is baffling in hindsight.

Count me among the Heritage Hall haters coming into the season.

I pegged USC at 9-3 this season, with losses at Utah, at UCLA and against Notre Dame. My rationale: The Utes dominated the Trojans in Los Angeles last year, 42-26; USC suffered its biggest loss to UCLA in decades a year ago, 62-33; and Notre Dame has won 4 straight over their biggest rivals, including a 31-16 win in South Bend in 2021. How stupid. How utterly foolish.

Now, more than ever, we’re learning what a difference a year can make.

And the gap is truly stunning. The difference between the Trojans and the fifth-ranked Texas Longhorns is the world. No other class had anywhere near the combination of quality and quantity. 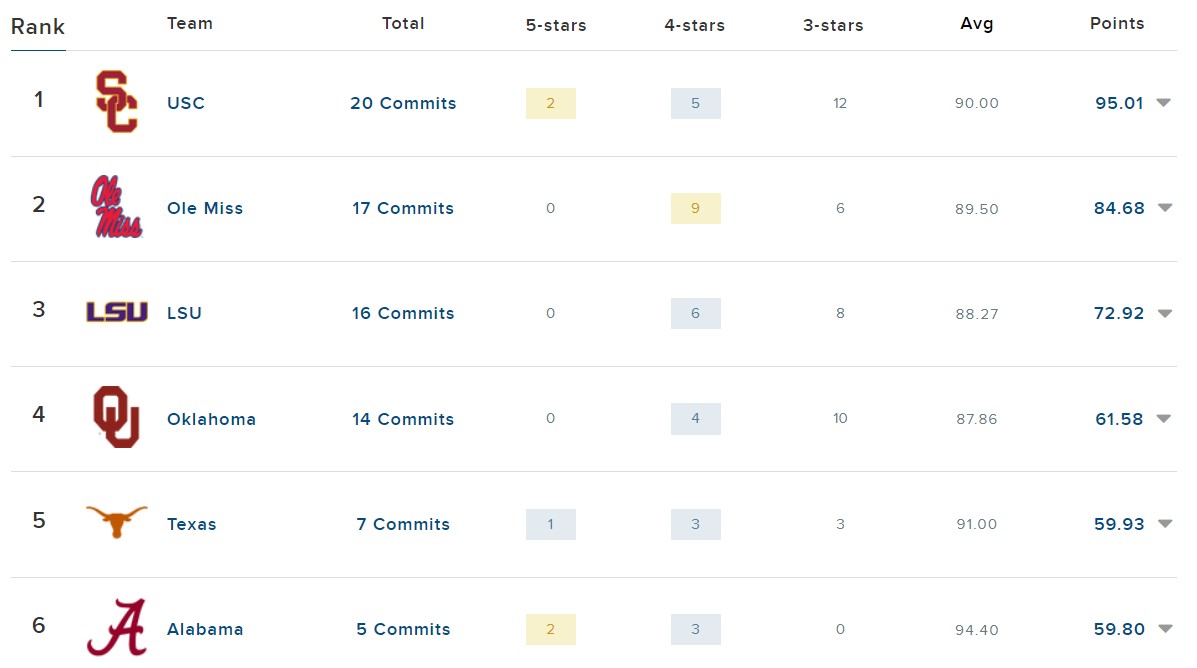 Do you really appreciate that?

USC brought in almost an entire starting lineup’s worth of 5-, 4- and 3-star transfers.

It’s not even Travis Dye or Mario Williams or Shane Lee. Or Romello Height or Austin Jones or Mekhi Blackmon or Brenden Rice or Bobby Haskins or Solomon Byrd or the 9 more transfers who have provided the Trojans with some depth.

It’s all of them.

If any team in the country returned that kind of talent on one team — and mixed in a bevy of former 5- and 4-stars, as well as a recruiting class that included a handful of untested top-rated talent — they would’ve been ranked in the top 5.

And now it begs three questions:

How good can USC really be?

Why wouldn’t they do this every year?

Why won’t everyone else try to copy them?

If you thought this offseason was bad, whew, boy, are you in for it.

Get ready for the swap meet of all swap meets, the clearance sale of all clearance sales, come one, come all, ladies and gentlemen, welcome to your highest bidder.

NIL has meant nil compared to what it’s going to mean going forward, for both the Trojans and the other top 15 programs in the country. Consider this disparity: USC brought in 20 transfers this offseason, Stanford brought in 1.

If the Trojans truly shatter expectations this year and go 11-1 — maybe losing to just Utah, or on a bad day, UCLA — and then win the Pac-12 championship, they’re headed to the College Football Playoff. That scenario feels all too realistic now.

That answers question No. 1.

And if they do deliver on those lofty goals, how does this not become the blueprint going forward? How can Riley do it any other way? Dye and Jones are seniors; OK, go pluck Deuce Vaughn out of Kansas State or Braelon Allen out of Wisconsin. Addison is only a junior but is projected to be a 1st-round NFL Draft pick; no worries, grab North Carolina’s Josh Downs.

We’ve opened Pandora’s Box, and we’re not going back now. This is a brave new world. If USC continues to play the way it has been playing, and continues to be rewarded by poll voters who’ve thrusted the Trojans all the way up to No. 7, there’s no going back.

LATEST NEWS
View All
8 minutes ago
Jonathan Smith says Oregon State will make a decision on its quarterback later in the week
32 minutes ago
Report: Defensive coordinator with Colorado ties could be Buffs' target for next head coach
47 minutes ago
Everything Utah's Kyle Whittingham said at his UCLA week press conference
2 hours ago
USC earns verbal pledge from former Notre Dame commit and 4-star offensive lineman
2 hours ago
Tetairoa McMillan captures Pac-12 Freshman of the Week honor
3 hours ago
Oregon sweeps Linemen of the Week honors in Pac-12 after Stanford win
VIEW MORE