Gold: Caleb Williams pulled off something harder than the Heisman -- he made USC fans believe again

LOS ANGELES — It was long after the game had ended, long after their hero had come to celebrate in a sea of cardinal and gold, and Hudi Potash was still in the front row of the Los Angeles Coliseum stands, still swaying to the music in the cold, still wearing nothing on his chest but cardinal and gold paint. Potash was the “1” in “HE13MAN” and the “P” in “SUPERMAN!” and Caleb Williams had just come up to this group of 8 fanatics and thanked them, rendering them rabid.

Thirty minutes prior, the USC football team had just closed out its regular season with a 38-27 win over Notre Dame, improving to 11-1 with their eyes bulging at the possibilities ahead. This was before the Utah Utes dashed the Trojans’ dreams for the second time this season. The Pac-12 title game still lay in front of them on this night, as well as the College Football Playoff. A national championship was next.

Coming off a 4-8 season that left players stunned and fans depressed, USC hadn’t just turned around its fortunes, it gained back its fan base, long jilted after being long spoiled.

“Last year was the most demoralizing thing,” Potash said. “We’d say Fight On and be like …. ehh, I don’t know if we believe this. Maybe a little bit? To get back to 11-1, and to have Caleb, it’s so awesome. You really feel that connection to that tradition of winning and victory.” 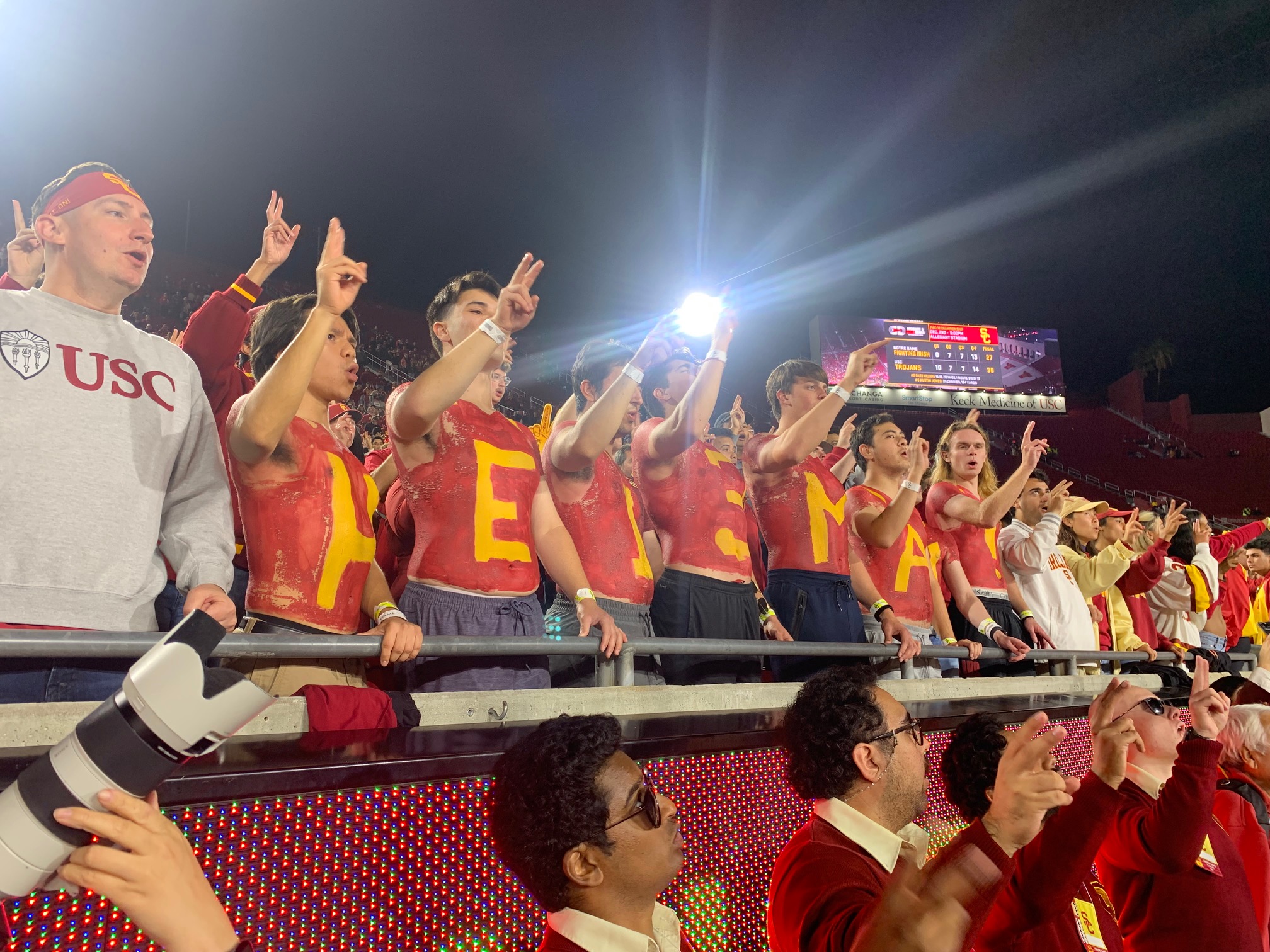 For a moment at least, USC fans believe again.

They believe in their head coach, Lincoln Riley, for the first time in who knows how long.

They believe in their team for the first time in a half-dozen years.

They believe in their quarterback for the first time in almost two decades.

If Caleb Williams has brought one thing back to USC fans like Potash, it is hope.

“It’s amazing,” said Potash, who hails from New Orleans and could be home cheering on the LSU Tigers, but instead matriculates in Los Angeles studying public policy. “When I came here, honestly, my hopes were pretty low. I’d still pay, but I’d say, ah damn, we’re gonna lose. Then we get Lincoln and we get Caleb, and I don’t feel the cold today. I’m just so happy.”

Now that he’s helped get the fans back, can Caleb Williams also bring back the Heisman?

On Saturday night in New York City, Williams will share a stage with three other outstanding quarterbacks, the four finalists for the grandest trophy in college athletics. They each boast singular resumes, with particular strengths that boost their stories.

CJ Stroud. The Ohio State quarterback returned for his redshirt sophomore season after one of the best freshman campaigns in college football history, when he completed 317-of-441 passes (71.9 percent) for 4,435 yards and 44 touchdowns with 6 interceptions. He was on pace to match or better those stats until a late-season swoon, when he finished with passer ratings below 140 in 3 of the final 4 games. He was brilliant nonetheless, finishing with 3,340 yards and 37 scores with just 6 picks and a nation-leading 176.2 passer rating, guiding OSU to the Playoff.

Stetson Bennett. The Georgia quarterback led the Bulldogs to an undefeated season and a chance at a second straight national championship. (The last team to repeat was Alabama in 2011-12). Bennett has the lightest stats of the bunch — he passed for 3,425 yards and 20 touchdowns with 6 interceptions on 269-of-395 passing, while adding 7 rushing touchdowns — but the easily the best team success. His Bulldogs opened the year with a 49-3 thrashing of No. 11 Oregon, beat then-No. 1 Tennessee, 27-13, handled No. 14 LSU in the SEC title game, 50-30, and boasted 9 wins by a margin greater than 20 points. He is also a former walk-on quarterback boasting one heck of a career arc.

Max Duggan. The TCU quarterback labored through 3 so-so seasons, lost the starting gig in fall camp to Chandler Morris, filled in for Morris after he was injured in Week 1 and seized the role while leading the Horned Frogs to an undefeated regular season. Duggan had 24 touchdowns and 2 interceptions in his first 8 starts this year, finishing the year with 3,321 passing yards and 30 passing touchdowns with just 6 interceptions. He played valiantly in the Big 12 Championship, passing for 251 yards and a score and rushing for 110 yards and a touchdown and nearly leading the Horned Frogs to a comeback before falling, 31-28, in overtime.

The 2022 Davey O'Brien Award has been awarded to TCU's Max Duggan pic.twitter.com/ZRMJ8uBUVk

And then there’s Williams.

Like Stroud, he followed up a fabulous freshman season with a stupefying sophomore year, putting up some truly bonkers stats.

Like Bennett, he lifted the Trojans to a terrific season in the win column, guiding USC from a 4-8 record to an 11-1 regular season.

The 2022 Burlsworth Trophy has been awarded to Georgia's Stetson Bennett pic.twitter.com/IvxEsRrXkc

Like Duggan, he succumbed in the conference championship game, despite a heroic solo effort on one leg after suffering a hamstring injury, a performance that Riley dubbed, “maybe the gutsiest performance I’ve ever seen.”

For all those reasons and more, Williams is expected to be crowned the Heisman winner on Saturday at the New York Marriott Marquis. As of Thursday night, he was the consensus betting favorite to win the award, particularly after becoming the first Trojan to win the Associated Press Player of the Year award since Reggie Bush in 2005 and the first USC quarterback since Matt Leinart a year prior. He is hoping to follow in their Heisman footsteps, as well.

If Williams’ Heisman hopes were solidified in the win over then-No. 15 Notre Dame and bolstered with an epic 500-yard performance the week prior in a 48-45 win over then-No. 16 UCLA at the Rose Bowl, they were brought to life in a 4-game stretch that directly preceded the back-to-back ranked wins.

⚔️ 5️⃣0️⃣3️⃣ ⚔️@CALEBcsw had himself a DAY against UCLA, earning the most total yards by an individual player in series history 😤 @uscfb pic.twitter.com/wdoKhG29Ab

And he did all of this playing alongside a defense that continuously put pressure on the offense to keep them competitive.

In a month-long stretch that started with a 43-42 loss to the Utes — the team’s lone regular-season blemish — Williams threw for 1,420 yards and 17 touchdowns with just 1 interception while adding 3 rushing touchdowns.

Before that fantastic second-half run, Williams had underwhelmed in the first half, finishing with as many games with a passer rating below 150 as above 170.

But starting in Salt Lake on Oct. 15, Williams settled in and treated USC fans to the best run by a quarterback in nearly 2 decades, and for the year, Williams threw for 4,075 yards — the 4th-most in the country — while tying for the national lead with 37 touchdowns. He also set a USC QB record with 372 rushing yards and added 10 rushing touchdowns, and his scrambling ability drove the national media wild.

He broke the school record for total yards and total touchdowns. He led USC to an 11-1 record and the Pac-12 title game after a 4-8 season, and most importantly, he packed the Los Angeles Coliseum and gave Trojans fans hope.

Williams should be your 2022 Heisman Trophy winner. 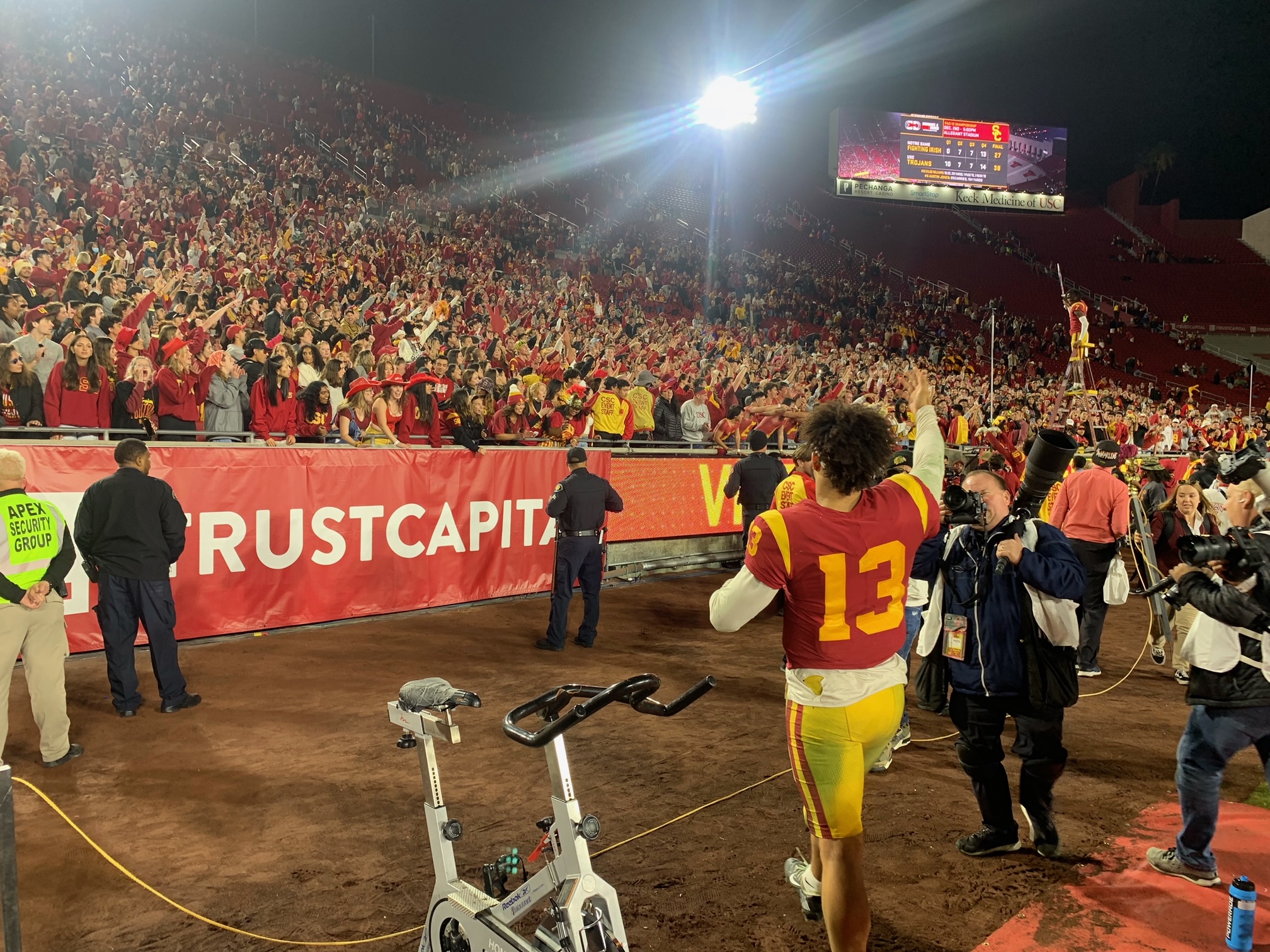